Preference for soft toilet paper is an environmental travesty

Greenpeace and  Kimberly-Clark have announced the successful resolution of the Kleercut campaign as the maker of Kleenex has established a new sustainability policy focused on protecting Endangered Forests. Go to www.greenpeace.org/kleercut to find out more!

Major newspaper outlets today are buzzing about how Americans’ “preference” for soft toilet paper is an absolute environmental travesty. But is it really a preference, or something that has been sold to us by pulp and paper heavies like Kimberly-Clark?

Tissues, toilet paper, and other disposable products are responsible for unspeakable destruction of ancient forests around the world. And, in today’s New York Times, tissue maker Kimberly-Clark (K-C) has probably given us a bit more information than they meant to about the extent of the destruction they’re causing despite their green claims.

Today, the NYT ran an article that said:

But fluffiness comes at a price: millions of trees harvested in North America and Latin American countries, including some percentages of trees from rare old-growth forests in Canada.

The article doesn’t mention Kleenex, the Kimberly-Clark brand that is so ubiquitous it has become synonymous with “tissue” itself. But one assertion, fittingly enough by a Kimberly-Clark spokesman, says all you need to know: “Dave Dickson, a spokesman for Kimberly Clark, said that only 14 percent of the wood pulp used by the company came from the boreal forest.”

He does not dispute that they’re cutting down the ancient boreal forests, just the percentage of their product made from a 10,000-year-old ecosystem.

That percentage is nothing to crow about, by the way.

Even assuming K-C is only meeting 14% of worldwide pulp need with pulp from the Boreal, this amounts to over 435,820 metric tons of Boreal pulp used by Kimberly-Clark in a single year. This has a disastrous impact on an ecosystem, and all for products that the company could be making from recycled paper.

And hang on, I recently saw somewhere a very different figure from Kimberly-Clark. One of the company’s fact sheets on Sustainable Fiber Facts reads: “In fact, at the end of 2008, our use of fiber from the Canadian Boreal forest had been reduced by nearly 50 percent from 2004 levels.”

What were those 2004 levels again? According to page 31 of the 2004 Kimberly-Clark Sustainability Report: “Less than 15 percent of the fiber we use globally is sourced from the Canadian Boreal Forest.”

Hmmm… Is it 14%, like they said in the NYT today? Or half of 15%, like they claim on their website? Whatever the real number maybe, if you really care about preserving forests, it comes in handy to actually have a stated policy to protect 100% of ancient forests.

Kimberly-Clark was also taken to task today by the UK newspaper The Guardian, which was not as polite to the paper product industry as the NYT, and chose to go with this lead:

The tenderness of the delicate American buttock is causing more environmental devastation than the country’s love of gas-guzzling cars, fast food or McMansions, according to green campaigners. At fault, they say, is the US public’s insistence on extra-soft, quilted and multi-ply products when they use the bathroom.

The article also states that “Barely a third of the paper products sold in America are from recycled sources — most of it comes from virgin forests.”

So is using recycled really a difficult choice for Americans or is it just something we’ve been told by big tissue companies? The Guardian article also points out that,

The New York Times has reported a 40% in sales of luxury brands of toilet paper. Paper companies are anxious to keep those percentages up, even as the recession bites. And Reuters reported that Kimberly-Clark spent $25m in its third quarter on advertising to persuade Americans against trusting their bottoms to cheaper brands.

So maybe softness is not a preference of Americans, maybe someone’s been spending $25 million a year to whisper in our ear that recycled isn’t good enough. Although, on the other hand, I seem to remember something Kimberly-Clark said in an article about the quality of recycled content: “Using a K-C proprietary technology, Kleenex Naturals brand facial tissues contain 20 percent high-quality recycled fiber and provide the product softness and quality consumers have come to expect from the Kleenex brand.”

So when K-C spends $25,000,000 in a single year to sell us the expensive virgin stuff, then recycled products don’t make the grade. And yet Kimberly-Clark admits that recycled fiber can be used to provide the softness we expect.

Kimberly-Clark claims that the problem is American consumers (again in The Guardian piece):

Dave Dixon, a company spokesman, said toilet paper and tissue from recycled fibre had been on the market for years. If Americans wanted to buy them, they could.

“For bath tissue Americans in particular like the softness and strength that virgin fibres provides,” Dixon said. “It’s the quality and softness the consumers in America have come to expect.”

If you need any more convincing you can also take a look at this Fast Company article that explains how, together, we can improve the practices of Kimberly-Clark.

Hopefully, someday carrying a box of Kleenex or Cottonelle to the check-out counter will be considered as ridiculous as driving around town in a Hummer.

Don’t be a part of the problem.

Embrace bidet sprayer technology for all the benefits for you, your family and the environment.

Please make a change in your life today,

This article is courtesy of Greenpeace.

Please support Greenpeace in their fabulous work to make our world a better place for everyone.

I’m pretty sure you love being clean. You love a refreshing shower. You like having clean hands. Your family members are the same. Invest in The Bum Gun Bidet Sprayer today.

Click this link to place your order today and improve your quality of life forever. Or paste into your browser: https://www.thebumgun.com/product/1-x-titan-valve-offer/ 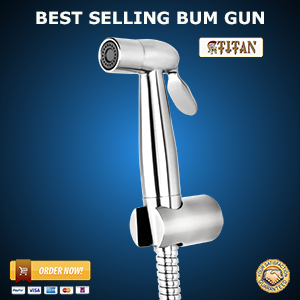 Why Thames Water Is Going Hard After Wet Wipe Users

Unless you’ve been on a tropical island for the last few years, you’ll most likely know about the massive fatberg...

I’m tired of our so-called smart politicians. Yes, they are ‘supposed’ to be getting the best information from...